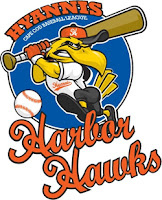 The Cape League Playoffs start this evening, so before I move on to that, let’s take another look at the other team that was eliminated.

Yesterday, I covered the Brewster Whitecaps, who finished last in the Eastern Division. Their counterparts in the West were the Hyannis Harbor Hawks. At 17-27 (good for 34 points), the Harbor Hawks actually tied for last place in the division. However, the Bourne Braves had the advantage in the tiebreaker, and moved on to face the top-seeded Cotuit Kettleers.

That doesn’t mean the Harbor Hawks were short for good players, though. In fact, they had possibly the best player in the league. Even if he was’t the best player in the league, lefty Sean Manaea (#51) was definitely in the conversation. I know I already wrote about the Indiana State sophomore, but it’s fun just to revisit some of his stats. 85 strikeouts. 7 walks. 0.54 WHIP. 1.22 ERA. 14.9 K/9. .97 FIP. -4 opponents OPS+. He went the entire month of July without surrendering a walk! Of course, he won the team pitching triple crown*. In general, he was just pretty dominant this summer.

*The official ERA qualifier for the league is 36 innings. In any case, Manaea leads for all of Hyannis’ pitchers with 20 or more innings. He has 51.2 innings.

Manaea was undoubtably the staff ace, but he was just one of three Hyannis pitchers to make the All-Star Game. Michigan State righty David Garner (#1) was another one. I feel like listing anyone after giving Manaea’s numbers doesn’t do them justice, but Garner was impressive in his own right. He struck out just under one per inning (41 Ks in 43.1 innings), and had a solid 1.130 WHIP (12 walks and 37 hits) and 3.12 ERA to match. He also held opponents to a .228/.281/.327 batting line, which is about a 66 OPS+. It’s worth noting that Hyannis’ park plays close to neutral, with slight favor given to hitters. Garner, a sophomore, will also be eligible for next year’s draft.

The other impressive Harbor Hawk All-Star pitcher was actually a freshman: Jeff Hoffman (#23), a righty out of East Carolina University. He posted similar numbers to Garner, with 30 whiffs in 30 innings a 1.030 WHIP. That WHIP contained 10 walks and 21 hits allowed, so he had a slightly lower K/BB ratio, but a lower opponent batting average to go with it. Speaking of which, opponents hit .196/.275/.306 off of him. That’s a 59 OPS+, by the way. It’ll definitely be interesting to see what he can manage with another year of polish.

There were four interesting batters, all of whom played up the middle positions. Dominic Jose (#22) was the team’s switch-hitting everyday center fielder. A freshman out of Stanford, his .272 doesn’t immediately jump out. However, he led the team in OPS at .857, on the strength of a solid .377 OBP (second on the team) and a .480 slugging percentage (first). He also tied for the team lead in home runs with six. Like Hoffman, it’ll be interesting to see how he does if he comes back next year, with a full year of experience to build off of.

Jose’s Stanford teammate, Brett-Michael Doran (#3), manned second base for Hyannis. He was fifth on the team in batting average at .294, but led the team in on base percentage at .406. That number also put him eleventh in the league, so he definitely has a solid batting eye. He also held a .420 slugging percentage (on the strength of two homers and nine doubles). In any case, an .857 OPS is more than solid, especially for a second baseman. Doran, like Manaea and Garner, is a sophomore.

Doran’s double play partner, Brandon Trinkwon (#15), is also a sophomore out of a school in California (UC Santa Barbara, in this case). He was another All-Star representative for the Hawks, as well. He tied for the team lead in home runs (six), and had ten doubles to go along with it, leading to a strong .301/.354/.470 slash line. A shortstop with a 125 OPS+ is always a good thing for a team to have. He also led the team and all CCBL shortstops in batting runs created, at 27.45.

That obviously just leaves the team’s catcher, Mitchell Garver (#10). Garver is a junior out of the University of New Mexico, so he may be a little less projectable than the other three players. However, he did play well enough to earn the starting gig for the West All-Stars. He hit .298 with four homers in 37 games, and his twelve doubles led the team. His 24.13 runs created rate second among Cape League catchers, behind only Andrew Knapp. Also, his .354 OBP and .457 slugging percentage were good for a 121 OPS+. Again, an up-the-middle position hitting 20 to 25% above league average is always a good thing.

With that, we can wrap up the regular season. All four playoff series start Thursday night!
Posted by Theo at 11:34 PM