We’ve finally passed the end of 2022, which conveniently also serves as the final day of Hall of Fame voting. We still won’t be seeing the results until January 24th, though, so that leaves us plenty of time to follow Ryan Thibodaux’s Ballot Tracker and see if we can predict the end results.

At the time of this writing, there are just over 100 ballots that have been released, which is a little over a quarter of the final tally. Heading into the 2023 election, it seemed like Scott Rolen was poised to lead the pack; he reached 63.2% of the vote last time, and everyone ahead of him either was inducted last time (David Ortiz) or aged off the ballot (Barry Bonds, Roger Clemens). Carlos Beltrán would be joining the ballot, but he long seemed like the kind of candidate that would need to stick around for a few years and work his way up to 75%.

I was a big fan of Rolen’s growing up (he was my favorite third baseman to watch, which as you can maybe tell from the site’s name, was a big deal to young-me), so I’ve been pulling for his induction for years now (I can find articles where I referred to him as a future Hall of Famer dating all the way back to 2010, at the very least). Plus, I’ve been saying for about four years now that 2023 looks like it could be the year that he’s finally inducted, so it would be nice to see all of that pay off.

But what exactly are his chances of making it this year? A lot of the time, the ballot tracker is pretty intuitive, but there are a lot of complicating factors here. So let me walk you through my thought process:

The Basic Evidence For Rolen’s 2023 Hopes

Well, first of all, he’s over 80% right now. That’s good! If that holds, he’s got 5 full percent of cushion! It also helps that his total has been slowly-but-generally creeping up as more ballots are released, and that he’s already a net +4 in voters (5 conversions versus only one lost vote compared to his 2022 voters), plus he’s gone 6 for 6 among new and returning Hall voters.

While final percentages are almost always lower than what we see in the Ballot tracker, hovering around the 80% mark has traditionally been pretty safe; that’s been right around where David Ortiz, Mike Mussina, Larry Walker, Trevor Hoffman, and Iván Rodríguez were when they finally got inducted. And like I said at the top, he was the leading vote-getter among the returning candidates, so he should be good to go, right?

The Basic Evidence Against Rolen’s 2023 Hopes

There are other concerning points, though. For instance, in addition to running the tracker, Thibodaux likes to post graphs on Twitter showing how the top candidates so far are trending against their vote totals from past year. Here’s his latest batch, featuring the top six candidates so far.

I’ll also include an image of Rolen’s chart specifically below: 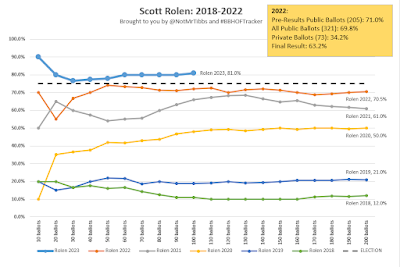 Maybe his increases are slowing down, and he’s already swayed most of the easily-gettable voters? Or maybe we’re seeing the earliest votes include more existing Rolen votes, limiting his chance for flips? Whatever it is, something else definitely appears to be going on here…

If we’re going to take a deeper look at what’s going on, one of the ways that the Ballot Tracker breaks down votes is by when the ballot was released. There are three groups in question: we have the voters who release their ballots before the results, the voters who release their ballots after the results are revealed (whether that’s on their own or as part of the Hall of Fame’s bulk public release afterwards), and the voters who don’t reveal it at all (which at this point requires opting out of the Hall’s public results).

Last year, Rolen was trending at 71.0% prior to results day, with a little over half of voters choosing to reveal their vote early. Late revealed ballots, which were around 30% of the vote, still generally approved of him as well, voting for him at a 67.5% rate. Combined, those work out to a 69.8% rate, and if it were just those two groups, I would be guaranteeing Rolen makes it in this year.

But as you might have guessed based on the fact that his actual vote total was around 63%, the last 20% of voters did not come anywhere close to that. BBWAA writers who didn’t reveal their Hall of Fame ballot only voted for Rolen at a 34.2% rate. This group is on-the-whole stingier with their votes, so that makes a little bit of sense that Scott’s totals would be lower, but that still seemed a little extreme. So how does that compare to other candidates who had to build their way to election?

I went back and checked against the results from past years, dating all the way back to 2014*, and no one else has seen results that low while reaching 60% of the overall vote. There’s not even a good point of comparison here; Mike Mussina is the next lowest, at 46.2% in 2018 (his final vote total ended up reaching 63.5% that year). Larry Walker was at 27.9% in 2019, but he still hadn’t hit 60% of the vote at that point (he would reach 63.5% of the unreleased vote the next year, which corresponded with his in-total jump from 54.6% to 76.6%). Every other candidate was easily crossing the 50% threshold with unreleased ballots by the time they reached 60% overall.

*This was mostly because this is how far back the ballot tracker goes. I could maybe go back further with a little calculation on my end using the archived data they have for prior years, but I wasn’t sure it was necessary for what I was doing here.

It’s basically just that group, too. Rolen’s vote totals with post-results ballots tracks with everyone else; he was at 51.5% with them in 2021 when he passed the 50% mark overall, and 67.5% last year at 60+%. Both of those are in line with other candidates.

Even his results with unreleased ballots weren’t that out-of-line last year, when he crossed the 50% mark. He was basically stable between 2021 and 2022, pulling in 32.4% with private votes in 2021. That’s not the highest mark among 50%-total candidates, but it’s also not the lowest. It’s just that his vote total didn’t increase the following year, for whatever reason.

Which brings up the bigger question: was this a one-year aberration, or is there something about Rolen as a candidate that this group of private voters doesn’t like? We really have no way of knowing at this point, but it makes all the difference. If it’s a one-year aberration, then this is an easy fix. Hall voters (especially the less-informed ones, which tends to describe this group) are greatly swayed by a candidate’s momentum, and Rolen has a lot of potential converts available. Seeing Rolen actually pass the 60% total mark might trigger a domino effect that easily pushes him up to 50% or higher among this group and over the overall-75% line (although, again, we won’t really know that ahead of time).

And again, there should be more room for him on their ballots. At least some private voters tend to not use all ten spots on principle, so while most of them weren’t technically unable to vote for Rolen prior to this year, the simultaneous departure of Ortiz, Bonds, Clemens, Curt Schilling, and Sammy Sosa could still mean more votes to go around here anyway.

But… maybe it’s something about Rolen that these voters just don’t get? Again, this tends to be a less-informed group, so they might just not understand someone whose case rests on being great across many different parts of the game. If private voters continue to flip slowly and he ends the 2023 cycle at only, say, ~40% of this segment? Then there’s a very real chance he ends this election in the 70-74.9% range and has to try again in 2024.

That wouldn’t be the end of the world necessarily; he’d have four more chances to climb the last few inches. But it would be frustrating, and there would be the added complication of an incoming class of strong new candidates headed by another great third baseman in the form of Adrián Beltré (as well as Joe Mauer and Chase Utley, among others). And really, given how crowded the ballots have been over the last decade, and how many times we’ve had to waste limited ballot spots to re-run candidates who finished just a percent or two short (Craig Biggio, Edgar Martinez, Trevor Hoffman, Jeff Bagwell, Vladimir Guerrero, maybe some more I’m forgetting)... It’s getting a little old, to say the least.

And of course, even underwhelming returns in the private ballots might be offset if the late-but-public votes swing hard enough in his favor, or if there are some late flips among early-release voters, or if the total number of public ballots become an even larger share of the voting pool; but once again, all of those are things that we just won’t know for some time. Just going off what we saw last year, Rolen needs to flip a lot of BBWAA voters who don’t like to explain their votes.

So, where exactly does that leave us on Scott Rolen’s chances in 2023? Well, I’d say I’m more confident than I was at the start, when I noticed that “just add 8-9%” didn’t get him across the finish line. I have no reason to think private voters hate Rolen in particular just yet; he did jump from 11.1% to 32.4% between the 2020 and 2021 ballots. But I do think he’s going to be very close to the borderline either way, and the factors that would do the most to indicate an improvement to his chances won’t come until it’s too late to make predictions, so the entire thing feels rather opaque even with all the strides we’ve made in predicting the Hall results.
Posted by Theo at 5:52 PM