Fred McGriff Elected to Hall of Fame, and Other Results of the Veterans Committee Election

On Sunday night, we got our first major announcement of the Hall of Fame election: the newest iteration of the Veterans Committee came together and unanimously selected Fred McGriff as the newest Hall of Famer.

Firstly, I want to congratulate him on the accomplishment; a five-time All-Star and World Series champ, with 493 homers, 2490 hits, 441 doubles, and a 134 OPS+. His resume isn’t the kind that looks substantially underrated with more advanced stats, but I think he fits within Cooperstown comfortably (as I’ve written before), especially when you give him extra credit for things like postseason success or a memorable persona.

Secondly, I’d like to note that the vote played out pretty much in line with my predictions. McGriff sailed in unanimously with 16 votes (12 were needed), and everyone else was varying degrees of far away; Don Mattingly finished with 8 votes, then Curt Schilling and Dale Murphy at 7 and 6, respectively. The rest of the ballot (Albert Belle, Barry Bonds, Roger Clemens, and Rafael Palmeiro) finished with under 4 votes each (although totals are not specified, below a certain cutoff point). And as someone with a pretty extensive history writing about the Hall’s voting procedures (and especially the Veterans Committee), I figured that I would add some context.

I want to start with this: Fred McGriff is a good argument for the existence of a Veterans Committee. And I mean this in several ways; he’s a good player who might have been overlooked for not being as flashy. He’s exactly the kind of deep-cut star they exist to raise up, the prototypical VC selection.

But in the less poetic sense, he’s one of the types of player who would fall through the obvious gaping holes in the Hall’s election process, since it is a bunch of stupid systems stacked on top of other stupid systems that can often whiff on anything outside of the easiest candidates. Sometimes, though, one of those backup stupid systems will by some miracle do what it was created to do and pick up slack for one of the earlier stupid systems.

For example, people have, for years, been talking about how limiting the writers’ Hall ballot to only ten names in incredibly stupid. It turns what’s already a tough, subjective question (“Is Player X a Hall of Famer?”) into an even tougher and messier one (“Is Player X more of a Hall of Famer than Player Y?”). McGriff could honestly be the poster case for the problems here. Just look at his vote progression: 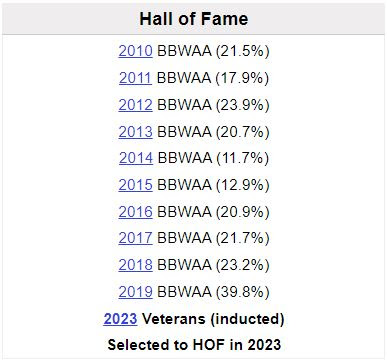 That debut at 21.5% might look rough, but it’s actually not unheard of for eventual Hall of Famers to start voting there, especially in modern voting. Bert Blyleven, Larry Walker, Jack Morris, Tim Raines, arguably Edgar Martinez… they all started around there as well!* And all but Morris did it on just the BBWAA ballot! Sure, not everyone who starts there makes it, but it’s hardly a death sentence, especially when you see that he ended up at nearly 40% of the vote.

*And if we look a little bit to the future, I’d strongly bet that Scott Rolen, Billy Wagner, and Todd Helton all join these ranks in a few years.

The most interesting thing here is that that 40% showing in 2019 was nearly double his previous high, which came waaay back in his third ballot in 2012. Why the sudden stall-out after that year? Well, here’s what the 2012 ballot looked like (sorted by career WAR): 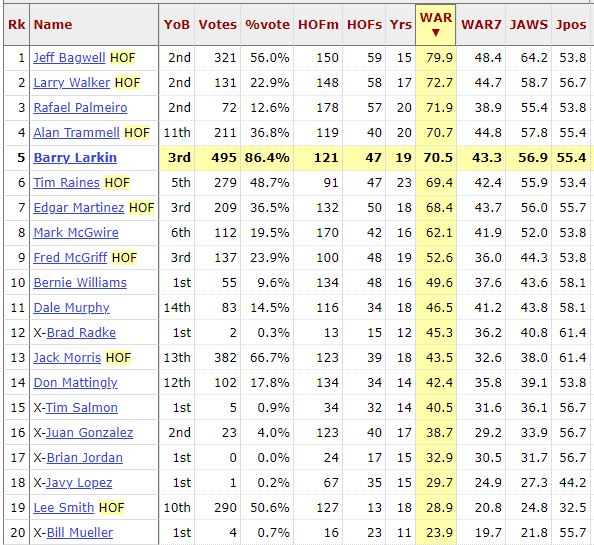 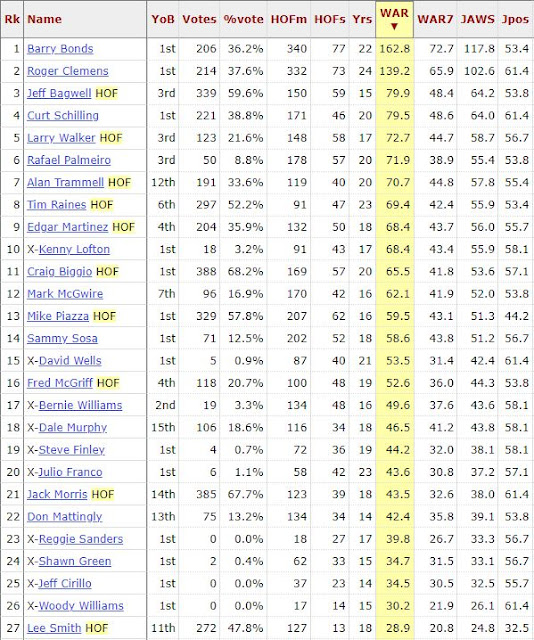 McGriff, in one year and by one measure, went from the ninth-best name (on a ten-vote ballot) to the sixteenth. The onslaught of top-tier candidates from that point was relentless, with Greg Maddux, Tom Glavine, Frank Thomas, Mike Mussina, and Jeff Kent joining the ballot in 2014; Randy Johnson, Pedro Martinez, John Smotlz, and Gary Sheffield joining in 2015; Ken Griffey Jr., Trevor Hoffman, and Billy Wagner joining in 2016; Ivan Rodriguez, Vladimir Guerrero, and Manny Ramirez in 2017; Chipper Jones, Jim Thome, Scott Rolen, Andruw Jones, and Omar Vizquel in 2018; and Mariano Rivera, Roy Halladay, Todd Helton, and Andy Pettitte in his final year.

And that’s just the guys who stuck around for an extended period and got notable votes! Guys with real and interesting cases, like Jim Edmonds and Lance Berkman and Johan Santana, came and went without even a second try! That's a dozen first-ballot Hall of Famers, plus maybe another dozen non-first-ballot Hall members once all the dust settles.

The fact that McGriff generally held steady in his vote percentages during this stretch is wild! Either he had a core of voters who were really committed to seeing him inducted even as big stars flooded the ballot, or he was turning over enough new voters to replace any who were forced to drop him for the ten-vote limit. Either of those seem like a good start to building Hall momentum among the electorate, but that’s contingent on other voters having the space to add him, and even up to his final election, voters were still listing him as a final cut they had to make to get to ten players

And of course, limited ballot sizes once again played a factor in this year’s VC election; just not in a way that hurt McGriff’s candidacy this time. Instead, we’ll be looking at the down-ballot options. As I mentioned at the top, Don Mattingly and Dale Murphy finished second and fourth, with 8 and 6 votes. I… don’t really know what to make of this.

I originally mentioned that I was a little disappointed to see both of them on the ballot again, since both of them are coming up on a full twenty Hall of Fame ballot appearances (between both the BBWAA and Veterans processes), with little in the way of forward momentum. It’s especially rough since their appearances this year appeared to come at the expense of guys like Lou Whitaker and Dwight Evans, who are I think better players overall and certainly more deserving of a re-evaluation, given how few ballots they appeared on in comparison.

(Granted, I probably went a little too hard playing devil’s advocate for Albert Belle in my original preview article; there was a little more ambiguity in how he might perform in this year’s vote, but I definitely think Mattingly and Murphy have stronger cases, and I would have kicked Belle for space before either of them.)

So seeing Mattingly and Murphy finish so well on this ballot… I’m of two minds. On the one hand, it’s nice seeing that they got some momentum! Their inclusion here wasn’t the total waste that I feared it might be! Maybe this turns into momentum for next time, maybe not, but it’s definitely better than remaining stagnant yet again.

But on the other hand, it looks like a whole lot was stacked in their favor this time around; VC voters generally seem to have stayed away from the three players with PED ties (as well as Belle), meaning they were essentially only competing with Schilling and McGriff for votes. And it still wasn’t quite enough; can they really count on another situation like this next time?

And going back to Evans and Whitaker again… back in 2020, they finished with 8 and 6 votes, ahead of both Mattingly and Murphy falling below the “less than 3 votes” threshold. Voters generally seemed to agree the former two were better, even in a straight head-to-head competition. Would that trend have held this year? Could one of them made it in as well had they been here instead, given the apparently favorable conditions? It’s extra frustrating given that I noted that the committee’s composition this year seemed like it could have been tilted towards Whitaker, given that longtime teammates Alan Trammell and Jack Morris were voters.

Of course, let’s go back to that ballot math while we’re thinking about this. Again, due to the recent ballot changes, voters only had 3 spots to use. 3 ballot spots times 16 voters means there were 48 spots to go around, with candidates needing 12 to be inducted. McGriff was unanimous, meaning the other seven players were splitting the remaining 32 votes. At best, we could have seen two more inductees, if things were planned reasonably well. Mattingly, Schilling, and Murphy added up to 21 votes, so we either had 11 open spots or the other four candidates splitting them.

That looks a lot like the results in 2020, except with one unanimous player at the top rather than two non-unanimous inductees and only one 6-vote player rather than two. Stronger candidates like Evans or Whitaker might have helped consolidate votes at the top… but it’s also hard to ignore that reduction in ballot size.

The ballot lost ⅙ of its players, but voters lost ¼ of their votes; things really were tighter this time around. The board of the Hall seems fine hurting all candidates’ chances of induction if it gives players with steroids an extra hoop to leap through, and I can already tell that’s going to be a frustrating recurring thorn in our collective side for the next few years, with the VC threatening to return to its stingy ways of the 2000s and early 2010s.

Either way, congrats again to Fred McGriff on his deserved induction! From here, the next stop for Hall voting is the BBWAA ballot, with early votes already trickling in. And for the Veterans Committee, if I understand the new rotation of ballots correctly, next year will be the modern era non-players ballot; I originally thought that was going to be The Bruce Bochy Ballot, but since he’s back managing again, I guess we’ll just have to wait and see what happens.
Posted by Theo at 3:19 AM