Over my years of writing at Hot Corner Harbor, I’ve acquired several traditions of pre-playoff previews, all of which make for interesting trivia. I’ve explored all of them in-depth in the past, so this year, I decided to combine them all into one mega-preview. So without further ado, let’s jump right in.


As you may have guessed, the Cubs wiping out their 108-year drought has brought down the overall drought rankings for the 2017 playoffs. 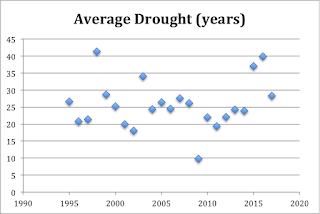 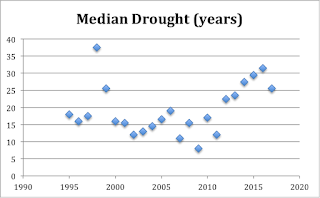 Going back to the start of the Wild Card era 23 seasons ago, 2017 represents the sixth highest average World Series drought for playoff teams. Meanwhile, it’s tied for the fifth-highest median drought. Since last year was the second highest of this era, what was the main cause of the switch?

Well, to start, five of this year’s playoff teams are identical to last years (Red Sox, Indians, Nationals, Cubs, and Dodgers). The Astros to the Rangers was an even swap (since neither has won the World Series and the Astros are only a year younger, but it’s also a year later than last year). The Blue Jays to the Twins was also a pretty even swap, given that their last titles came in 1993 and 1991, respectively. The pair of new National League Wild Card teams were a modest gain (the Giants and Mets were 2014 and 1986, while the Diamondbacks and Rockies were 2001 and never), but the AL Wild Card more than offset it by replacing the Orioles with the Yankees (1983 to 2009) However, the most significant change was pretty obviously the Cubs winning last year and resetting their “last title” category from 1908 (108 seasons) to 2016 (1 season).

Overall, this is what our “last title” counter looks like for each playoff team:

Players Without a World Series

As per usual, I’m planning on publishing a “Best Active Players Without a World Series” Sporcle quiz once we know the results of this year’s playoffs (and thus, who can be crossed off the list). 72 of the players in the Top 100 of Baseball-Reference’s Active WAR leaders list have never won a title; I won’t publish the full list here, but if you’re curious which teams have the most championship-starved players, here are your current rankings:

If you’d rather not receive any spoilers for the forthcoming quiz, skip to the next bold heading; otherwise, I’ll go into who made the list for each team.

The Cubs basically wiped out their backlog last year and didn’t sign any veterans on the list. The Yankees, meanwhile, are represented only by Chase Headley, thanks to their recent youth movement. The Diamondbacks and Rockies, NL Wild Card opponents, are tied at two each, with Zack Greinke and Paul Goldschmidt facing off against Nolan Arenado and Carlos Gonzalez, respectively.

In one of the more interesting coincidences, every AL division winner has a quartet of Series-less players on its roster. Surprisingly, the Astros have the longest-tenured bunch, between the long-suffering Carlos Beltran, recently-acquired ace Justin Verlander, 2017 pick-up Brian McCann, and MVP candidate Jose Altuve. The Red Sox, meanwhile, feature a pair of aces in Chris Sale and David Price, star outfielder Mookie Betts (just reaching #99 on the overall list), and Hanley Ramirez. And the Indians have Edwin Encarnacion, Corey Kluber, Carlos Santana, and Austin Jackson.

But everyone lags behind the Washington Nationals. Bryce Harper and Stephen Strasburg are young but have been solid enough to play their way into the bottom half of the top 100 active players list. Max Scherzer and Ryan Zimmerman are long-time stars towards the top of that list, Gio Gonzalez has been solid enough for long enough to make the lower end of the list, and mid-season acquisition Howie Kendrick sits firmly in the middle of the top 100.

Expansion Teams
Two years ago, the Royals and Mets matched up in a historic postseason: it was the first time that two expansion teams had ever met in the World Series, even going back to the first rounds of expansion in 1961 and 1962. Last year’s follow-up between the Cubs and Indians, in contrast, was between a pair of teams who were each part of their respective league’s original eight (albeit both were without titles dating back to before the expansion era either way, as mentioned)

Given those polar opposites, which match-up are we most likely to see this season? Well, we didn’t quite match the record for most expansion teams in a single postseason, but we did fall one shy with four. However, due to the unequal balance between leagues and the Wild Card set-up, our chances for a second All-Expansion Series aren’t great.

In the American League, the Houston Astros are the only expansion team in the playoff field, but they at least missed the Wild Card Game by virtue of clinching their division. Over in the National League, meanwhile, the Rockies and Diamondbacks will be facing each other in the Wild Card game, guaranteeing one gets knocked out, while the Nationals will be facing the Cubs in the Division Series. So, we could see an all-original team Championship Series, and all-expansion team one, or a mix. Assuming that each series is essentially a coin-flip for simplicity’s sake (which isn’t too bad of an estimate, to be honest), that means our odds of another all-expansion affair in the season finale is about 12.5%, or one-in-eight.

So even these pairings that have occurred before would still feel pretty unique to some extent. I mean, the Dodgers weren’t even the Dodgers yet when they last faced Boston and Cleveland (they were still the Brooklyn Robins). And of the two series we could see that have already occurred multiple times, one of them saw Joe DiMaggio shelling Dizzy Dean halfway through Franklin Roosevelt’s second term the last time it happened.

Of course, the easiest way to guarantee a new pairing of World Series teams is to hope for the Astros or Nationals. Washington has never won a pennant, dating back to the inaugural season in Montreal back in 1969, while the Astros’ lone appearance in the October classic came back when they were a National League team.

If you’d like to see the matchup that have occurred by team (so you know what to root for or against), here you go:


And with that, hopefully you now have an idea of who to root for in the playoffs this year. You know, assuming your team didn’t make it. Check back here after the World Series to see the final follow-up to all of this.