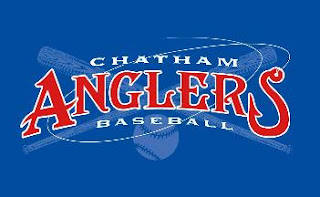 While the Falmouth Commodores were probably my home team this past season, the Chatham Anglers were a close second. Nine of the 27 games I attended were at Chatham's Veteran's Field, and the Anglers played in twelve of my total games. Like the Commodores, the Anglers were the third seed in their division; Chatham went 21-21-2, tying them with the Orleans Firebirds (Chatham won the season series between the two, 4 games to 2, giving them the edge in the tiebreaker). And, like the Commodores, despite being swept in the first round, plenty of players demonstrated their talent for the team this year.

My association with the Anglers means that I’ve already gotten to write about some of their best players. That includes All-Star Andrew Knapp (#38), who was arguably the team MVP this season. Knapp is a 6’ 1” switch-hitting catcher out of UC Berkeley who just completed his sophomore season (making him eligible for the 2013 draft). He was probably the best catcher in the CCBL this year, too (although injuries kept him to only 13 of his 40 games behind the dish, with the rest at first and DH). His traditional triple crown stats were good-.293 average, eight homers, 29 RBI (all of which led Chatham). He was also a key player in the team’s widely noted patience at the plate (the A’s tied for the league lead in walks), giving him a .414 on-base percentage. He also had some serious pop, finishing second in the league with 21 extra base hits. That was also good for a .557 slugging percentage. He even finished seventh in the league in OPS (.971), again, as a catcher. Catchers with .300/.400/.500 slash lines are pretty rare. Most teams are thrilled to get any offense from such a demanding position-a 164 OPS+* is fantastic. Definitely an interesting (and fun) player to watch in the future, especially if he remains at catcher.

*As a note, that is not park adjusted. The park factors say that this year, Chatham played as a very good hitters’ park. But over the last three years, it has played as a slight pitchers’ park. I would be more inclined to say it’s close to neutral, maybe slightly pitcher-friendly overall, but a 164 OPS+ approximation is probably reasonably accurate.

Next to Knapp, the best hitter on the team was third baseman Chad Pinder (#5), a sophomore out of Virginia Tech. Pinder battled a hernia for the entire season, but still managed to finish the season with four home runs and a .278/.345/.532 batting line that was only behind Knapp in OPS. Batting roughly 38 percent better than league average while injured is fairly impressive, and he came to Chatham with quite a bit of draft buzz. I wouldn't be surprised to see him go high in the 2013 draft, especially if he heals and comes back at full strength in the spring.

As someone who attended a number of Chatham games, the hitter who impressed me the most after Knapp and Pinder was outfielder Dale Carey (#9). Carey, a sophomore, was the Anglers' starting right fielder. However, that was more a function of their lineup (Chatham carried three normal center fielders) than his ability. He has great speed, translating to great range. Even without outside knowledge, his skill set makes it fairly obvious he normally plays center field for the University of Miami. His batting eye is impressive, too. Despite a low .240 average, he finished second on the team with a .363 OBP. He has enough speed to take extra bases-9 of his 29 hits were for extra bases. While that gives him a .339 slugging percentage, his low average means it's a much more playable .099 isolated power.* If he can limit his strikeouts (49 in 121 at bats), he could be a force to be reckoned with.

*ISO is slugging-batting average, and can be thought of as extra bases per at bat.

The pitching staff didn't have any big stand-outs, but had quite a few solid, decent pitchers. The rotation featured three above-average sophomores. The most impressive was team ERA-leader Michael Wagner (#36), a righty from the University of San Diego. A big part of his 1.57 mark was his mere two home runs allowed on the year. That low number may indicate future performance, but it's not too likely. He does have good stuff, throwing 34.1 innings with a 38/14 K/BB ratio and a 1.170 WHIP. Opponents only hit .206/.310/.302 against him, so even if he wasn't as dominant as some other teams' aces, he was still a strong pitcher.

His teammate at San Diego, lefty Louie Lechich (#21), showed promise as well (while also spending some time in the outfield). His 4.55 ERA was belayed somewhat by his 31 K/BB in 31.2 innings. His biggest problem was his six home runs allowed. Again, that may or may not be a fluke. Time will tell. He also had a slightly high 1.390 WHIP and a .260/.333/.421 opponent batting line.

The two best arms out of the bullpen were both juniors, making them a little less projectable. Right-hander Jaime Schultz (#16) from High Point University led the team with 40 strikeouts in only 22.1 innings. He only issued 11 walks, too, although he also hit 3 batters. That gave him a 1.160 WHIP and a really bizarre opponent triple slash of .188/.302/.220. His control appears to need a little work, but a 16.1 K/9 rate is very nice.