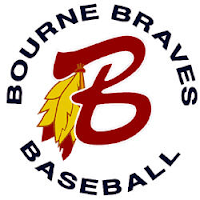 Just as the Orleans Firebirds were the number four seed in their division that upset the top seed in round one but lost in the semifinals, so too were the Bourne Braves. They finished in a tie with the Hyannis Harbor Hawks at 17-27 and won the tiebreaker by going 4-2 against them during the season. The Braves made the most of their opportunity in the postseason, taking the team with the best record in the entire CCBL, the Cotuit Kettleers. The eventual champion Wareham Gatemen ended their run the round after that, though, by sweeping them.

Leading the offensive attack for the Braves was North Carolina sophomore Colin Moran (#12), the team’s starting third baseman. The All-Star hit six home runs and led the league in RBI. His .314/.379/.503 batting line (batting average/on-base percentage/slugging percentage) was good for a .882 OPS, which was second on the team. On top of that, Bourne is definitely a pitchers’ park; maybe not the strongest in the league, but it’s in the conversation for second. That means his 140 OPS+ is probably closer to 150. In any case, he should be interesting to watch in next year’s draft, as it sounds like he will be going rather high.

Fellow All-Star and Southern Mississippi freshman Mason Robbins (#10) also provided punch for the Braves line-up. Robbins hit eight doubles and 7 home runs, while leading the team in two of the three slash categories (average and slugging). His overall .316/.365/.581 slash line equalled a .946 OPS, and the resulting 156 OPS+ is, again, on the low side due to my lack of accounting for park factors. A 160-165 mark in the corner outfield may not be as impressive as a 145-150 mark at third base, but when you consider that Robbins has an extra year or development ahead of him, he may be just as interesting to watch in the future.

The other Brave hitter of note was Sacred Heart University junior John Murphy (#15), the team’s final positional All-Star. His .308/.362/.452 line looks a lot better when you realize that he’s a shortstop playing in a pitchers’ park. His 122 OPS+ is, again, probably closer to 130, which is great production from a middle infielder.

The Braves managed to hold together a solid, stable rotation throughout the season. Five of their pitchers started 35 of their 44 games; no other team in the league got more starts from their top five starters.

Mike Mayers (#27), right handed sophomore from Mississippi, had the fewest starts and innings of the set, with six and 28.0, respectively. However, he may have been the most impressive; he led the team with 42 strikeouts, and only walked seven batters. His ERA of 4.82 is a little high, and that’s partly from his five home runs allowed, which may be a fluke. He did have a 1.250 WHIP on the season, and a 3.17 fielding independent pitching mark.

Southpaw sophomore Chad Green (#30) from the University of Louisville was almost as good of a control pitcher. In 36.0 innings across six starts, he struck out 41 and allowed only nine walks and three home runs. That helped him to a 3.00 ERA, a 1.080 WHIP, and a 2.66 FIP. He also held opponents to a .219/.264/.345 batting line that was 34% worse than league average. Although some of that would be lost when accounting for park, it doesn’t change that he still looked very impressive.

Jaron Long (#3), right handed sophomore out of Ohio State, managed a 3.47 ERA in 36.1 innings. He demonstrated similarly great control, keeping a 32/5 K/BB ratio while only allowing one home run. He finished the year with a 1.160 WHIP and a 2.11 FIP. He also led the team in innings, with one third more than Green.

Lastly is Thompson’s team co-leader in starts, Jon Keller (#33). Another right-handed sophomore (this time from the University of Nebraska), he probably had the shakiest control, walking fifteen batters in 33.2 innings. He did manage 35 strikeouts, though. His ERA (5.08) and WHIP (1.660) both look a little high compared to his four rotation mates. He did managed to hold on to a 3.13 FIP, though. If he gets his control down, though, he would compare even better to his teammates.

And with that, four-fifths of the Cape Cod League teams have been covered. All that remains are the final two, Yarmouth-Dennis and Wareham.
Posted by Theo at 2:17 AM