Scott Rolen Snags a Hall of Fame Plaque, Plus a Breakdown of the Rest of the Results

The Hall of Fame announced the results of the BBWAA election on Tuesday. With 76.3% of the vote, third baseman Scott Rolen will be joining Veterans Committee selection Fred McGriff on the Cooperstown stage this summer. 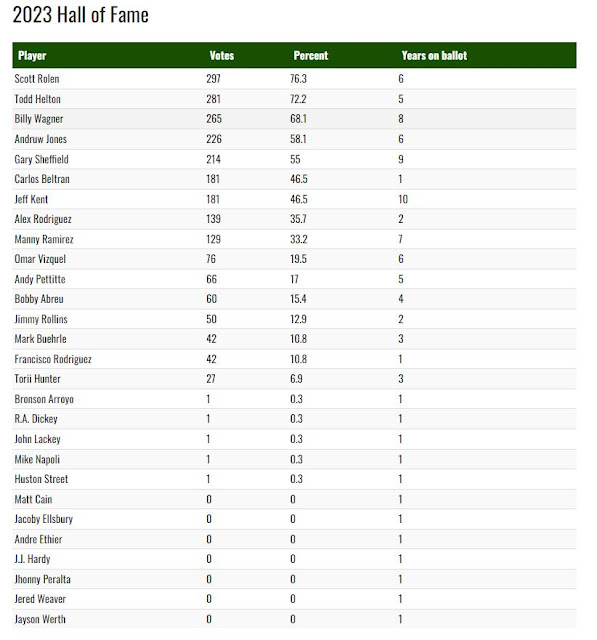 This is exciting news, for a lot of reasons. First of all, Rolen is a strong selection, and was deserving of induction years ago (2023 was his sixth ballot). He’s easily one of the top ten third baseman of all-time, with a top-fifteen bat and a top-five glove, the kind of two way star at the position only matched by Mike Schmidt and Adrián Beltré. In fact, “top five at third base” might be underselling his skill with the leather; Total Zone Rating, for instance, puts him twenty-fifth all-time in runs saved, across all positions. Having over 2000 hits, 300 homers, and 500 doubles on top of that is just icing on the cake.

Before moving on, feel free to take a minute and review some of Rolen’s defensive highlights:

Beyond just that, he helps bolster Cooperstown at third base, easily the position the Hall is the thinnest at. Rolen is only the eighteenth third baseman to be elected, the fewest at any position besides Designated Hitter, and just the tenth to earn the nod from the BBWAA. And on top of all of that, Scott set a new record; after debuting with just 10.2% of the vote back in 2018, he has now supplanted Duke Snider as the Hall of Famer who had to climb the furthest to gain the writers’ nod (Snider started at 17% and took eleven tries before winning their approval). It’s a good sign of all the ways the voting body has become more willing to re-evaluate players that they’ve initially underestimated.

If you were following the pre-announcement ballot tracking, you might have seen that things looked a little dicey for Rolen’s chances. He was trending downwards in the last days before the announcement, and it looked like he needed some good luck to make it over the finish line. In my last piece, I noted that he would likely need to reach at least 50% among writers who don’t reveal their vote (a group where he failed to crack even 35% in 2022). Jason Sardell, who’s done some great work forecasting these results over the last few years, even had Rolen missing on his final projections.

But in the end, Rolen ended up clearing the 75% bar with a little room. Not much (he had 5 votes to spare, the closest election since Iván Rodríguez made it by just 4 votes back in 2017), but that’s better than it looked like he would do for a while, and it seems to indicate that he had healthy support among private voters.


We won’t know the exact numbers of how he did among private voters for a little bit, since some voters will inevitably release their ballots in the coming days and the Hall itself will publish the ballots of anyone who didn’t opt out in early February. However, I’m doing some back-of-the-envelope calculations, and it seems almost certain that Rolen’s percentage among private voters jumped at least 22%. Depending on how he does among late-public voters, he might have even come close to a 25 or 26 point improvement.

In that last piece, I noted that players who crack 60% of the vote overall (excluding the obvious outliers like Barry Bonds and Roger Clemens) tend to see a noted increase in support among private voters the following year, in a way that wasn’t particularly apparent when they hit, say, 50%. This is especially the case as of late, the further we move from the 2013-era ballot logjam, and I think that Rolen’s election provides more evidence to that idea.


The Rest of the Ballot

So, with that in mind, let’s move down the ballot. Todd Helton finished second this year, at 72.2% of the vote. That’s just 11 votes shy of induction, a very frustrating place to finish given that he ended up with nearly 79% of the early vote, but also impressive considering it represents a 20-point increase over his 2022 performance. You have to figure he’s a likely 2024 inductee at this point (and even if he isn’t, Helton will have another four years on the ballot after that).

Billy Wagner is the more interesting case to watch. He ended up 27 votes shy, at 68.1%, another big improvement from 2022 (51.0%). Picking up 7% in his final two tries seems doable, but what will be interesting to see is if he can do it in one. Crossing the 60% mark would seem to be a good indicator, at the very least. I’ll be curious to see how he does with late public votes versus private ones once that data comes out; if the latter group especially is low, it could represent an easy bunch of pick-ups next year, if those voters behave similarly to how they did with Rolen (and we’ll of course have another entire season of ballot tracking before we need to consider that anyway; if Wagner is constantly above 80% in the early voting, his performance with the other groups become much less critical).

In fourth place, Andruw Jones came close to hitting 60% as well, finishing his sixth ballot with 58.1%. Gary Sheffield also made it over 50%, jumping to 55.0% on his ninth try. Carlos Beltrán debuted at 46.5%, tying him with Jeff Kent, who finally aged off the ballot. I imagine that, like McGriff, Kent will make for a popular choice with Veterans Committee voters, and I would not be shocked to see them induct him at their first opportunity (which I believe is slated for 2026 at the moment, although that’s always subject to change).

Below them, and in contrast to most of the candidates, Álex Rodríguez and Manny Ramírez saw fairly minimal gains, landing at 35.7% and 33.2%, respectively. Omar Vizquel finally dropped below 20%, the only returning candidate to lose votes this year and the third straight election where he’s lost votes (all of which were following late-2020 reports on serious domestic violence and sexual harassment cases against him).

There are actually some interesting notes at the bottom of the ballot this year. Andy Pettitte (+6.3), Bobby Abreu (+8.4), Jimmy Rollins (+3.5), Mark Buehrle (+5.0), and Torii Hunter (+1.6) will all be sticking around for next year, with Abreu and Buehrle in particular nearly doubling their 2022 showing. And Francisco Rodríguez joins Beltrán as the only first-ballot players who will return for a second showing.

So, where does that leave us for next year?

The weak set of first-time candidates this year was a good sign for the backlog, as the big jumps in votes indicate, but that’s not going to be the case in 2024. Adrián Beltré is a surefire first-ballot type and another third baseman to follow Rolen, and he’s headlining a fairly deep class, both factors that indicate spare votes will be harder to find.

Joe Mauer will also be debuting. I personally think he’s worthy of the Hall of Fame, but I’m not sure if the BBWAA will induct him immediately. Catcher is also fairly under-represented in the Hall (only ahead of third base), and only two catchers ever have been inducted on their first ballot (Johnny Bench and Iván Rodríguez). Add in that Mauer’s more of a “high-peak” candidate than a “career-totals” one (2123 hits), something that voters haven’t always liked, and he might need two or more tries to make it.

David Wright, Bartolo Colon, Matt Holliday, and José Bautista might also pick up some votes. I wouldn’t be shocked if any of those four are one-and-done or if they inch past 5% for a second go-around. I think Colon probably has the most upside of them, but Hall voters have been very stingy when it comes to starting pitchers for the last few decades; to paraphrase a comment I left in my last article, I have a hard time seeing why Colon would get a second chance when David Cone, Bret Saberhagen, Dwight Gooden, Kevin Brown, Tim Lincecum, Johan Santana, Dave Stieb, Roy Oswalt, Cliff Lee, and Jamie Moyer (really, you can do this all day) all went one-and-done. But then again, Buehrle has managed to hang on for at least four years. Maybe we can split the difference on Colon, and he’ll join Orel Hershiser and Tim Hudson in the two-and-through group? We’ll see.

So how do the returning candidates slot into this? I think Helton is basically assured, barring any last-minute disasters. I also think Wagner is set up well for 2024; the crowded ballot might hurt his potential for a big gain, but since he only needs about 7% and enters the cycle as the returning runner-up, I think he can pull it off. So, my too-early prediction for next year is that the 2024 class is Beltre, Helton, and Wagner, with Wagner and Mauer the two to watch most closely in the next iteration of the Ballot Tracker.

Andruw Jones will be trying to cross the 60% mark (which shouldn’t be hard to do from 58%) and set himself up for induction in either 2025 or 2026. If he pulls that off, he would break Rolen’s record for lowest total for an eventual-BBWAA-inductee, having started on that same 2018 ballot at just 7.3%.

After him, I’m kind of shocked Gary Sheffield managed to pick up nearly 15% this election, especially given that he was completely stagnant last year? I don’t think much will come of it, given that he only has one more try and 20% to make up, not even getting into the fact that he hasn’t reached the 66% barrier that seemed to kill Bonds and Clemens’ chances. But if you asked me ten years ago which steroid-linked player would have the best Hall of Fame showing outside of those two, Sheffield probably wouldn’t have been my guess. I can’t even begin to guess whether that will hold up once he gets to the Veterans Committee.

Beltrán is another semi-wild card. Voters seem to have reacted negatively to his role in the sign stealing debacle, given that he was being described as a likely Hall of Famer when he retired. However, there’s a wide range of possibilities for what happens next. Stagnating would be rough, but we might also see something like what happened with Roberto Alomar; voters held back to deny him a first-ballot election, but he picked up nearly 17% on his second try. Something like that would land Beltrán around where Jones is now on his second try, with a pretty straightforward road to Cooperstown. Or you might see something like Fergie Jenkins or Gaylord Perry, both of whom took 3 tries (with Jenkins picking up ~10% per year and Perry closer to 5%), which would put him somewhere in the 5-to-7-ballot range. Or maybe he even outdoes Alomar, since there are more voters he can flip in year two? That one seems unlikely, but either way, he’ll be one to watch.

2025 will be another rough ballot, with Ichiro Suzuki and CC Sabathia headlining and a whole bunch of other interesting candidates joining the margins (including Dustin Pedroia, Ian Kinsler, Félix Hernández, and Troy Tulowitzki, among others). Maybe Andruw can swing an induction by then, but if not, he and any other holdovers (some mix of Mauer/Beltrán/Utley/Sabathia, I’d bet) should have an easier time come 2026, which has an even weaker class of candidates than this year (Cole Hamels? Ryan Braun?). Expect more clean up at the top of the ballot, plus if any of the players in the 10%-20% range this year (or any of the also-rans from the 2024 and 2025 classes) are still hanging on by then, this will probably be their best opportunity to make some noise. At this point, nothing is impossible.

I’m going to stop there because it already feels pretty far out, but if you want to talk about the 2027 ballot in the comments (Buster Posey, Jon Lester), godspeed to you.