My writing at The Crawfish Boxes and the dual-Game 163s yesterday made this sneak up on me more than the last few years, but I still wanted to keep my streak alive. But first things first: over at the Crawfish Boxes, I was one of the writers to submit my predictions for the AL Wild Card Game and Division Series rounds, so go check that out (spoiler alert: I picked the Astros over the Indians).

With that out of the way, on to the traditional trivia:


Droughts
For the second straight year, our average drought among playoff teams dropped. The NL side of things actually increased slightly, as the only change that made a difference in the overall field was the Braves (last win in 1995) for the Diamondbacks (2001). The Brewers joined the league the same year as the Nationals, so that was a wash, and everyone’s drought just got another year longer.

The only change in teams on the AL side was a slight uptick, with the A’s (1989) replacing the Twins (1991), but the Astros’ win last year ended the third-longest titleless streak in the majors. 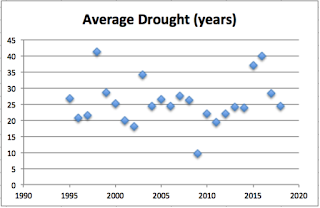 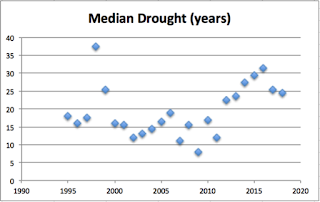 The most recent title for each playoff team:


Players Without a World Series
Each year, after the World Series, I post a Sporcle Quiz of the best active players by Baseball-Reference’s Wins Above Replacement without a championship. This year’s list has 70 players at the moment, with eight of the ten teams represented (the A’s are too young to get anyone on the list, while the Astros’ win last year cleared off all of their players). If you’re rooting for long-suffering stars to get their due, the breakdown by team is as follows:

If you’re curious which players are representing each team, I’ll include it at the end of the article to avoid spoilers for those who want to wait for the quiz.


Expansion Teams
We have yet to see our second all-expansion team World Series following 2015’s Royals-Mets October Classic. This year, if you’re hoping for the sequel, your only bet in the AL is the Astros, while in the NL you have your pick of the Brewers or Rockies. Assuming each series has a 50-50 chance of going to either team, that means there’s about a 9.4% chance of it happening this year.


Unique World Series Match-Ups
Of the 25 possible match-ups we could see in the final round, just over half of them have occurred. Those would be:

There are some interesting years in there. We have the most common and fourth-most common match-ups, the previous two World Series, the Kirk Gibson series, the series that marked the start of the Curse of the Bambino, the year of the Miracle Braves, the Rockies’ only pennant, the Dodgers with a history against every AL team, and a Braves-Indians match-up that includes each team’s most recent title. Also, I think it’s kind of funny that the Cubs have matched up with four-fifths of the AL side of the field despite that whole “seven-decade pennant drought” thing they just ended.

On the flip side, there are some interesting possibilities that haven’t occurred. The Rockies, if they faced the Yankees, would be the 26th unique franchise they’ve faced in the postseason (and they faced the Brewers in the 1981 ALDS, but never since their move to the NL, meaning they’d be World Series opponent #14). Boston-Atlanta would represent one of the few remaining match-ups of original teams that still hasn’t happened as well as a pairing of former city-mates. Houston versus Milwaukee or Colorado would be an all-expansion Series, as mentioned, and Milwaukee-Houston would match-up the only two teams to swap leagues.

To help you visualize the possibilities, here’s a full table of match-ups that have and haven’t happened yet: