(Also up over at The Crawfish Boxes)

One thing I mentioned in my ALCS Prediction is that, while the Rays had a better 2020 season than the Astros, and are more than likely the better team this year, that doesn’t quite mean as much as it seems. Obviously, short series in baseball are already much more random than they are in other sports (see, for instance, the 2006, 83-win Cardinals upsetting teams with 88, 97, and 95 wins). But the other part of the issue is that the Astros likely aren’t as bad as their record indicated, and the shortened season likely helps obscure that.

Yes, the Astros finished the abbreviated 2020 season with a losing record, at 29-31. On the other hand, there’s a reason most seasons go longer than 60 games. In fact, if they win the ALCS, the Astros would make for the third straight pennant winner who didn’t have a winning record through the first 60 games of the season, after the 2019 Nationals and 2018 Dodgers.

In fact, since 2000, seven out of the forty teams to appear in the World Series carried a .500 record or worse at the 60-game mark, with a quarter of the 2010s pennant winners in that club. I wanted to look a little more at that bunch of teams, and how their full season unfolded for a sense of what might have been. Those teams in question are (all stats from Baseball-Reference):

The actual World Series results of this group aren’t necessarily ideal, but then again, two World Series wins in seven chances is better than not making it at all. Either way, the 2020 Astros are pretty comfortably within this group’s range, well ahead of the 25-35 2005 Astros. And they’re tied for second with the 2014 Royals and 2007 Rockies, and just a hair behind the 2018 Dodgers, who needed a 4-game win streak just to reach .500. Those Dodgers would immediately lose their next game, and they had only one day above .500 until game 63.

Which brings me to the next question: what did the path to the pennant look like for those teams? And how does this year’s Astros team compare? 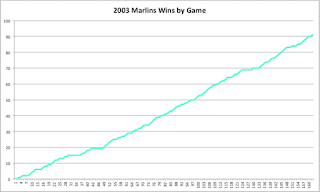 This is a convenient one because it provides an easy delineation point, in the form of firing manager Jeff Torberg after 48 games. Following his 16-22 start, Jack McKeon took the team 75-49 the rest of the way (equivalent to 98 wins over 162 games). Torberg was canned after his second of two 6-game losing streaks in May, then McKeon came in and the team immediately won six straight. After a .500 April and a 12-16 May (5-14 of which came under Torberg), the team had two months with single-digit losses (July and September) and “bottomed out” at another .500 month in August. I don’t want to attribute it all to a change in manager, but with just a quick look… it’s not like the hitters or pitchers were noticeably slumping one of the months but turned things around, and the only big additions were calling up a young Miguel Cabrera and trading for Jeff Conine and Ugueth Urbina. It’s probably worth a full breakdown to determine the exact effect he might have had, but for our quick look, McKeon taking over seems like a plausible explanation for the quick turnaround, at least. 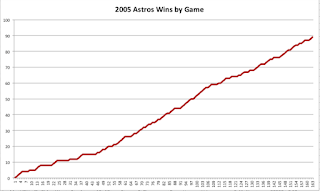 Like the 2003 Marlins, the 2005 Astros’ rock bottom actually came in the last third of May, with rock bottom coming at the 45-Game mark (15-30). Unlike the Marlins, they stuck with manager Phil Garner, and things turned around on their own. The team started with a 9-13 record in April despite slightly outscoring their opponents, but turned in an atrocious May, going 10-19. The lineup and pitching staff all slumped simultaneously, with May seeing clear lows in both OPS and ERA.

And then… they just got better, with both returning to April levels or getting better for each remaining month. The team also carried winning percentages above .600 for three of the remaining four months (and the other month, August, was a near-500 stretch where the team still outscored its opponents). With hindsight, this just looks like a streaky team that front-loaded their cold streaks (of course, in real time, the difficulty is in distinguishing between a good-but-streaky team and a normal bad team). 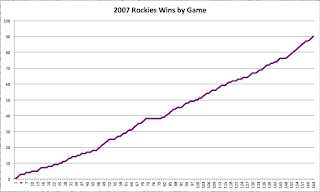 Speaking of streaky teams, we have one of the most famous examples. The 2007 Rockies actually only had one losing month, starting off 10-16 in April. But they turned it around, going 15-13 in May… while being outscored. They sort of turned things around again in June, outscoring their opponents by a decent margin this time… while only going 14-13, thanks in part to an eight-game losing streak at the end of the month, including four walk-offs.

None of the other teams listed here had a string of losses that long, but of course, none of them matched the Rockies’ 11-game win streak in October, let alone their 21-1 run to end the regular season and start the playoffs. They generally improved as the season went on all-around, but even before they posted their historic run, they still managed a separate 7-game win streak at the end of May. This was just a really streaky bunch, for whatever reason. 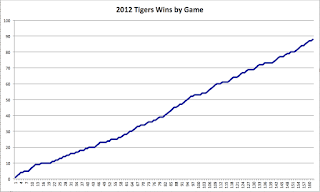 This might be the least impressive of the teams listed here; they ended with fewer wins than the other six, and unlike all but the 2018 Dodgers, they didn’t even have to settle for a Wild Card, winning a weak AL Central that included three 90-loss teams. Even their extremes were boring. They didn’t have a disastrous month that dragged everything else down like some of the others, they just had a really mediocre extended start, going .500 in April (while being outscored), having their only losing month in the form of a 13-16 May (while narrowly outscoring their opponents), then going 14-13 in June (while being narrowly outscored). They did win 16 games in July, August, and September, but didn’t keep any of them to single-digit loses like some of the teams here did at their peaks. They also improved in pitching and hitting throughout the year, between Doug Fister returning  from an injury, better optimizing their lineups, and acquiring Omar Infante and Anibal Sanchez before the deadline, which is probably at least part of that July-September run. 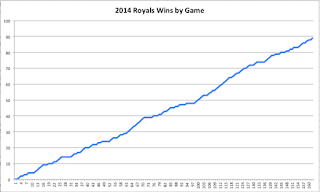 They weren’t quite at the level of the 2007 Rockies, but this was still a team prone to running hot and cold. They had one of the lower points of the teams here, going 12-17 in May, and were soundly outscored in July (despite keeping things to only 12-13), but they also had a 10-game winning streak in June (en route to a 17-10 record) and another 8-game run in August (en route to an even better 19-10). There was some noticeable improvement on the part of their pitching staff, although the offense mostly just ping-ponged between good and bad like their winning and losing streaks. So some improvement, but once again, this team mostly seems to be following the example of the 2007 Rockies. 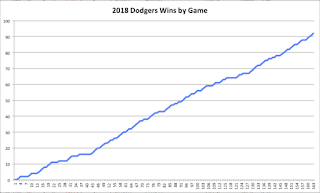 If the 2018 Dodgers are here for a reason, it’s to show that sometimes, good teams face bad luck. The Dodgers outscored their opponents in March through May, but went 26-30 in that time, topping out with a .500 record in May while outscoring their opponents 107-93. Their expected winning percentage based on runs scored and allowed was .550, but they were a sub-.500 team. They won at a better-than-.600 rate the rest of the way (a 17-9 June and an 18-9 August being the highlights), with at least some of the improvement likely coming from a healthy Clayton Kershaw and Hyun Jin Ryu, plus the acquisition of Manny Machado. 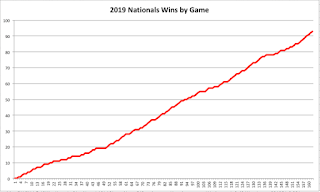 The 2005 Astros are the biggest similarity to this Nationals team; they were bad for the first two months or so, then everything started to click, and they never looked back. Also like those Astros, their low point actually came a little bit before the 60-game mark, as they had a 5-game losing streak going into Game #50 that left them at 19-31.

But also like the 2005 ‘Stros, the Nationals were actually scorching hot after that. 2005 Houston’s 22-7 July is the only month in this set that tops Washington’s 19-7 August (yes, even including the Rockies’ fabled September run). But even outside of that, they topped a .600 winning percentage every month from June on (with the high points being .692 in June and .731 in August). 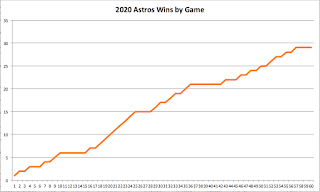 Technically, the Astros’ accomplishment is already impressive. I didn’t look for Championship Series teams with rough starts to help narrow my scope a little, but I would bet that it’s not too different from pennant winners with sub-.500 starts: rare, but not as rare as you would think.

But even then, it’s not too difficult to see similarities between this year’s Astros and some of these seven teams. Like most of them (by my count, all but the Marlins and Rockies), this year’s ‘Stros have success in surrounding seasons, indicating that this is something of a fluke rather than their normal. Over a full season, they might not be one of the teams that suddenly transforms into a .600 team, especially with their injuries. But it’s not at all difficult to see them as one of the “streaky” entries on the list; even last year, as a 107-win juggernaut, they still managed several extended losing streaks, including a 7-game one that only the Rockies and 2005 Astros from this group could equal (as well as a pair of 10-game winning streaks to challenge the Rockies and Royals).

With injuries to recover from, a young pitching staff, and so on, it’s easy to see how there was room to solidify things and improve down the stretch of a full season in the way they have this October. This playoff run against good teams could have been a hot June that set them on course for a late season playoff chase. But as is, they’ve handled strong A’s and Twins teams, and have kept close to a Rays team with a winning percentage on par with their mark last season.  It’s not a fourth-straight 100-win season, but that doesn’t mean this was a team destined for a losing season over 162 games, as their run so far has hopefully confirmed.