With the conclusion of all the Game 162s, it’s time for the 2019 edition of my Playoff Trivia article. Without further ado, let’s get into things:


DROUGHTS
After two straight years of drops following the pretty historic highs of 2015 and 2016, both the median and average drought of teams going into the playoffs rebounded slightly in 2019. 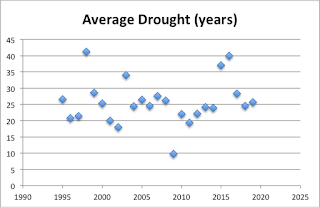 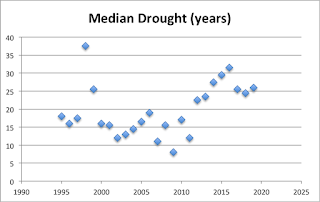 On the AL side of things, Cleveland, the team with the longest current drought, missing out hurt the overall numbers. But Tampa Bay, a team who has never won in 22 seasons, taking over for last year’s champ Boston helped mitigate some of the decreases that would result, and new AL Central champ Minnesota doesn’t have too shabby a drought of their own, last winning in 1991.

The NL side also returns three teams from last year, with all of them gaining one year in their drought counts. The swaps here are St. Louis, who last won in 2011, taking over for Colorado, who hasn’t ever won in 27 seasons; and Washington, who hasn’t won in 51 seasons, taking over for the Cubs, who won in 2016. That latter one is the other big reason Cleveland missing out didn’t drop the overall numbers too badly.

In fact, the NL Wild Card Game participants, the Brewers and Nationals, are currently tied for the third-longest active drought in baseball (with the Padres), as none of them has won a World Series since being founded in 1969. Only the Indians (last win in 1948) and Rangers (no wins, founded in 1961) have longer ones. However, no one else playing in October this year even falls in the top ten.


PLAYERS WITHOUT A WORLD SERIES
My yearly Sporcle Quiz updating the Best Active Players without a World Series will be coming after the season. 62 players will be included, although one of them played exclusively in foreign leagues (Erick Aybar) and two others retired during the season (Troy Tulowitzki and Ichiro Suzuki), although my official wording on the quiz is “players must have been active at some point during 2019”, so all three count.

If you want to know who the other players are, I’ll include a full list of names at the bottom. But to avoid spoilers, I’ll just list the number of players on each of team who qualified this year up here:

So not counting Tulo for the Yankees, a full half of teams in the playoffs have 3 title-less players on the roster. On the extremes, we have Oakland, who is mostly loaded with young talent and consequently has no one appearing in Baseball-Reference’s Top 100 active players, and Washington, who has a good mix of key stars who haven’t won and role players with long histories in the league


EXPANSION TEAMS
2018 denied us even one expansion team in the World Series, let alone the second-ever all-expansion series. This year, four of the ten teams headed to the postseason are expansions, and they’re even evenly distributed, with the Astros, Rays, Brewers, and Nationals carrying the banner.

The biggest issue is that three of the four are Wild Card teams. In the NL, the Wild Card slot is guaranteed to give us an expansion team, so there’s roughly a 1 in 4 chance the NL rep is not an original team. The Astros bring those odds up a lot on the other side, and if the Rays beat Oakland, the winner of an Astros-Rays Division Series gives a 50/50 shot of an AL Expansion Pennant. But if you figure it’s 1-4 for the Astros and 1-8 for the Rays right now, our overall odds of the Second All-Expansion Series are roughly 3 in 32, or 9.375%.


UNIQUE WORLD SERIES MATCHUPS
Speaking of the Astros, Rays, Nationals, and Brewers, if you want to see a unique World Series matchup this postseason, you need to start rooting for one of those four teams. The Twins, Yankees, Cardinals, Dodgers, A’s, and Braves just have too long and storied histories, but more on that in a second.

The Nationals have still never played in a World Series, meaning that anyone they face will make for a new match. Same goes for the Brewers, who have made a World Series, but it was back in 1982 when they were an AL team. There’s a chance they meet up with the Cardinals, who they faced that year (and have faced in the postseason since), but it won’t be in the World Series.

The Rays have actually won a pennant in their own league, but they squared off against the not-playoff-bound Phillies in 2008, so that rematch can’t happen. The Astros have also won a pennant since they switched (as well as one before then), although they could potentially have a rematch against the Dodgers. Every other combination would be new, however (and, like the Brewers, they have long postseason histories from their pre-league-swap days, although in this case, it’s against both the Cardinals and Braves, with some pre-2017 faceoffs against eventual 2017 World Series foes the Dodgers thrown in).

If, however, you’d prefer a series with a little more history behind it, every past World Series featuring a combination that could happen again in 2019 is listed below. Interestingly, the Twins have three pennants since moving to Minnesota, and each one has resulted in a different World Series matchup against one of this year’s NL Division winners. In contrast, you have the Yankees, who have faced off against the three NL Division winners a combined twenty times.