How Big Should the Hall of Fame Be?

It seems like an eternity ago that we had the 2012 Hall of Fame elections, but this weekend, Barry Larkin and Ron Santo will finally be inducted into the Cooperstown, both deservedly so. As a Big Hall person, I’ve long maintained that the Hall as it is is not inducting players fast enough, and both Larkin and Santo are evidence of that. The fact that it took Larkin three years to get inducted is bad; that it took Santo 32 years is indefensible.

I’ve always wanted to take a deeper look into my reasoning, at least to better explain why I think people are not being inclusive enough in their Hall selections. There are plenty of ways to look at it, but there had to be some way to show that the selection process has, if anything, gotten pickier.


A lot of people probably don’t realize that, given the amount of complaining that’s done each year as to how the Hall of Fame is getting watered down. Save it for the legends, they say. Except it’s never been that selective. For every Bruce Sutter or Kirby Puckett that people like to complain about now, there was a High Pockets Kelly or Rick Ferrell from back in the day that got elected. However, my argument isn’t that the Hall has always been as selective as it is now; I’m saying that it actually has much higher standards today than it ever has in the past.

First, a sampling of the straight number of eventual Hall of Famers: *1982 seemed like a good endpoint; it allowed players from that year twenty years (assuming that was their debut) plus the five year waiting period and five years to get elected.

So, that’s all well and good, but how does that prove that the Hall is more selective today? Well, as I mentioned, I also took the total number of players from each year. You may already see where this is going. Here are the total percentages of active players from those years that ended up making the Hall of Fame: 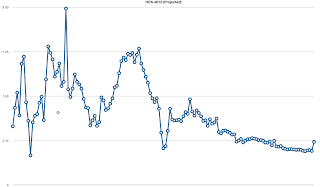 That sure looks different. There’s a spike right before the AL debuts (that’s the highest the percentage ever reached). That spike in the ‘20s and ‘30s was matched percentage-wise. In fact, the highest it ever went post-1901 was in 1933, when an astounding 11.522% of all active players ended up making the Hall of Fame. That’s insane. That would be like three teams just having their entire roster inducted into Cooperstown.*

*Although, if it went down to fan voting, we might end up with all of today’s Giants, Rangers, and Yankees inducted. Zing!-a timely All-Star voting joke.

Now, in all fairness, the numbers from about 1982 on will look low due to active players. However, I did run the percentages for years following that using the assumption that 37 players would be inducted:

Now, it’s pretty obvious what happened if you look at the years that the percentage dropped; it always corresponds to expansion years (1961, 1962, 1969, 1977, 1993, and 1998). Basically, the best players have to stand out above both a larger number of players and a larger percentage of the players in the game today.

So what would a Hall of Fame more true to the intended form look like? As stated, on average, there were 37 Hall-level players per season from 1901 to 1982. That worked out to an average of 6.643% of the players in any given season eventually making it to Cooperstown. Given that 2011 saw 1284 players, that would mean that, were we to continue at that previously-established rate, we need to honor just over 85 players who were active during the 2011 season.

Even as a big Hall person, I have to admit that that figure seems a little extreme. So, I ran a few other figures to get a sampling of what number of players the Hall could induct.

6%
The last season to see at least 6% of its players inducted was 1960, aka the last season before the first round of expansion. I suppose this figure could make sense, then, as this was the mark the final year before the league changed in size for the first time (meaning that the league was still the same size that it was back when the Hall was opened). Still, this would result in 77 players from the 2011 season making Cooperstown. Maybe there are 77 deserving players in the game today, but I would still balk at that mark.

5%
The league hasn’t been above the 5% level since the 1969 expansion that led to the Royals, Padres, Expos/Nationals, and Pilots/Brewers. This would lead to 64 current Major Leaguers making the Hall. This one is starting to look like a good upper bound, although, again, I haven’t actually looked at who would get into the Hall with this figure.

4%
Again, 1976 (pre-Blue Jays and Mariners) was the last time the election rate was this high. This equates to just over 51 modern-day Hall members. This instinctively feels like a good amount to me, for some reason.

Also, just for the sake of curiosity, here are the election rates (or projected rates) for all expansion and immediately pre-expansion years:

Or, to put it another way,

That’s kind of weird, just seeing it written down. Despite the fairly consistent addition of teams, the drop is never similarly consistent. I actually don’t know what to make of that, but it’s interesting to see.

Really, I guess all of this just puts a figure on how under-filled Cooperstown is or may be. I mean, I suppose you can argue that there should be about 37 players in any season who are worthy since that was the average for a long time, but I think this shows some of the problems with that. First, that doesn’t change the fact that there were, at one point, over 50 players per season making the Hall.

Second, it seems kind of silly when you think about it. Back when the Hall was established, a rough 37-player per year rate would mean more than two players per team per season could be expected to make the Hall. Now, we’re at the point when that’s just barely over one per team. On top of that, the league has to account for twice as much value league-wide, but the majority of those wins still need to be coming from the exact same number of players.

Say the future Hall players represent half of the value in the league.* Maybe, back in the day, the 37 best players could account for 616 wins (16 teams x 154 game schedule=1232 total wins). Today, though, those 37 players would need to be worth 1215 wins (30 teams x 162 games = 2430 total wins). Are the 37 best players today roughly twice as good as the 37 best players from 1920? No, and it doesn’t make sense to expect them to be. Then why are we still acting like the number of players elected today represents the same amount of value it used to?

*This figure is in no way accurate; it’s just for demonstration purposes.

And it’s not like this is going to significantly change the overall percentage that makes the Hall, either. Those extra players per season (8, 14, 27, or whatever you decided sounds right) are not unique (for example, although there are 372 players listed for the 1960s, 10 of those are Roberto Clemente, 10 are Willie Mays, and so on, since there’s carry-over from season to season). So, for example, if you picked 14 extra players at any time and you think the average Hall of Famer plays for 20 seasons, that represents one extra inductee every other year. That doesn’t seem too unreasonable to me, particularly when you consider the next few ballots.

Overall, I don’t see any reason for the Hall of Fame to continue inducting at the rate they have been. There’s no reason for it to become as ridiculously inclusive as it was for the 1920s, but at the same time, the current induction rate is getting ridiculous in its own way.
Posted by Theo at 12:26 AM